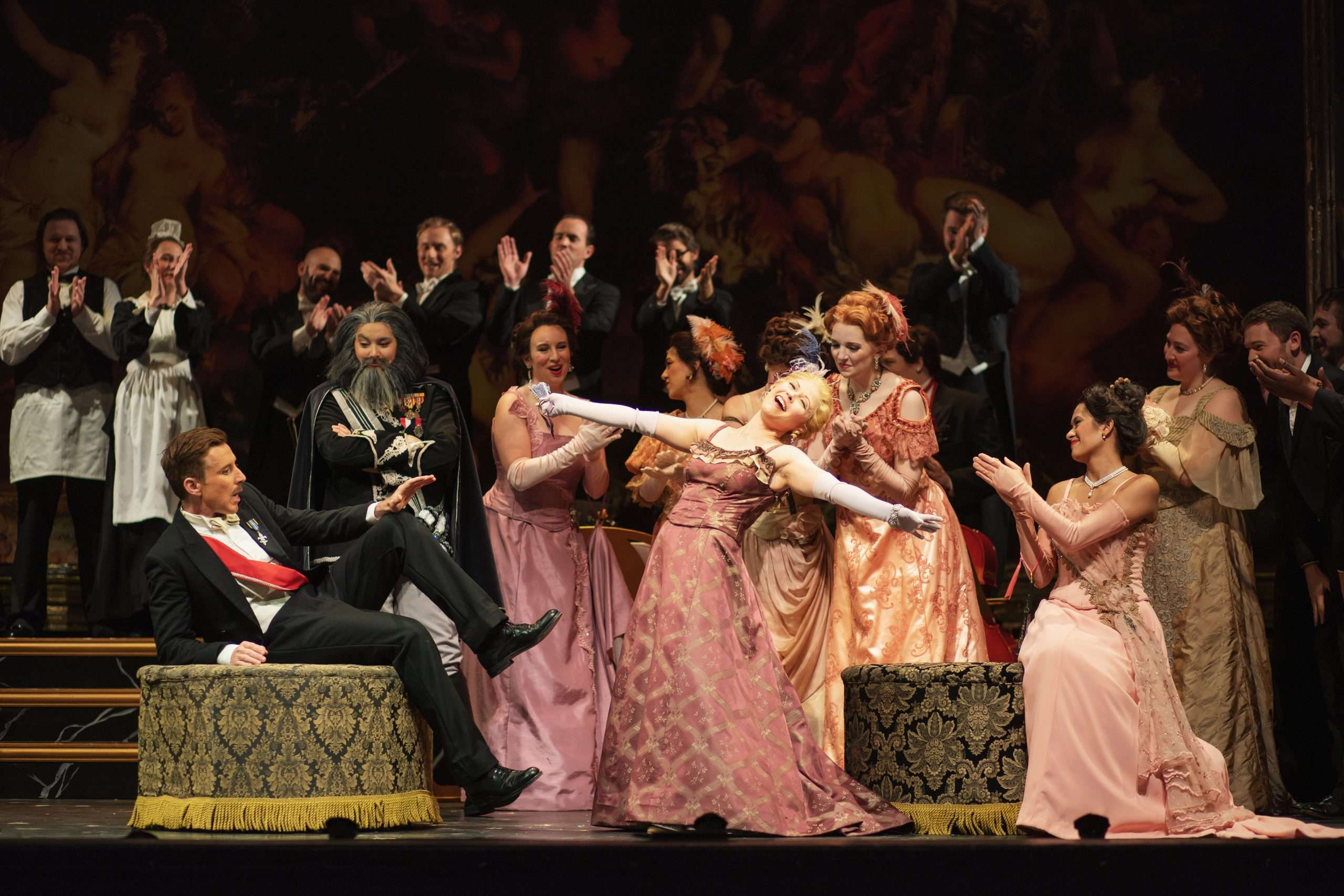 It’s easy to see why this operetta, now running at Central City Opera, with its classic farcical elements and the catchy melodies of Johann Strauss II (“The Waltz King”), continues to delight us 148 years after its debut in Vienna.

At its debut, Die Fledermaus shocked conservative critics with its witty social satire and contemporary dances, exactly the qualities that make it so popular. Marriage has always been a favorite target of farce, and in this case the story revolves around a disenchanted married couple who end up, unbeknownst to each other, attending the same ball in disguise. The action is filled with physical comedy, mistaken identities, impeccable timing, hyperbolic accents, clever shtick, and, with each production, newly minted and inventive topical commentary.

The couple, Gabriel Von Eisenstein (William Ferguson) and his wife, Rosalinde (Hailey Clark), as well as the majority of folks attending the ball, are unaware that the entire event, leading up to and including the proceedings, are orchestrated by Dr. Falke (Troy Cook), as revenge for a prank by Eisenstein, who left him passed-out drunk, and nearly naked, in a bat mask after the last ball. 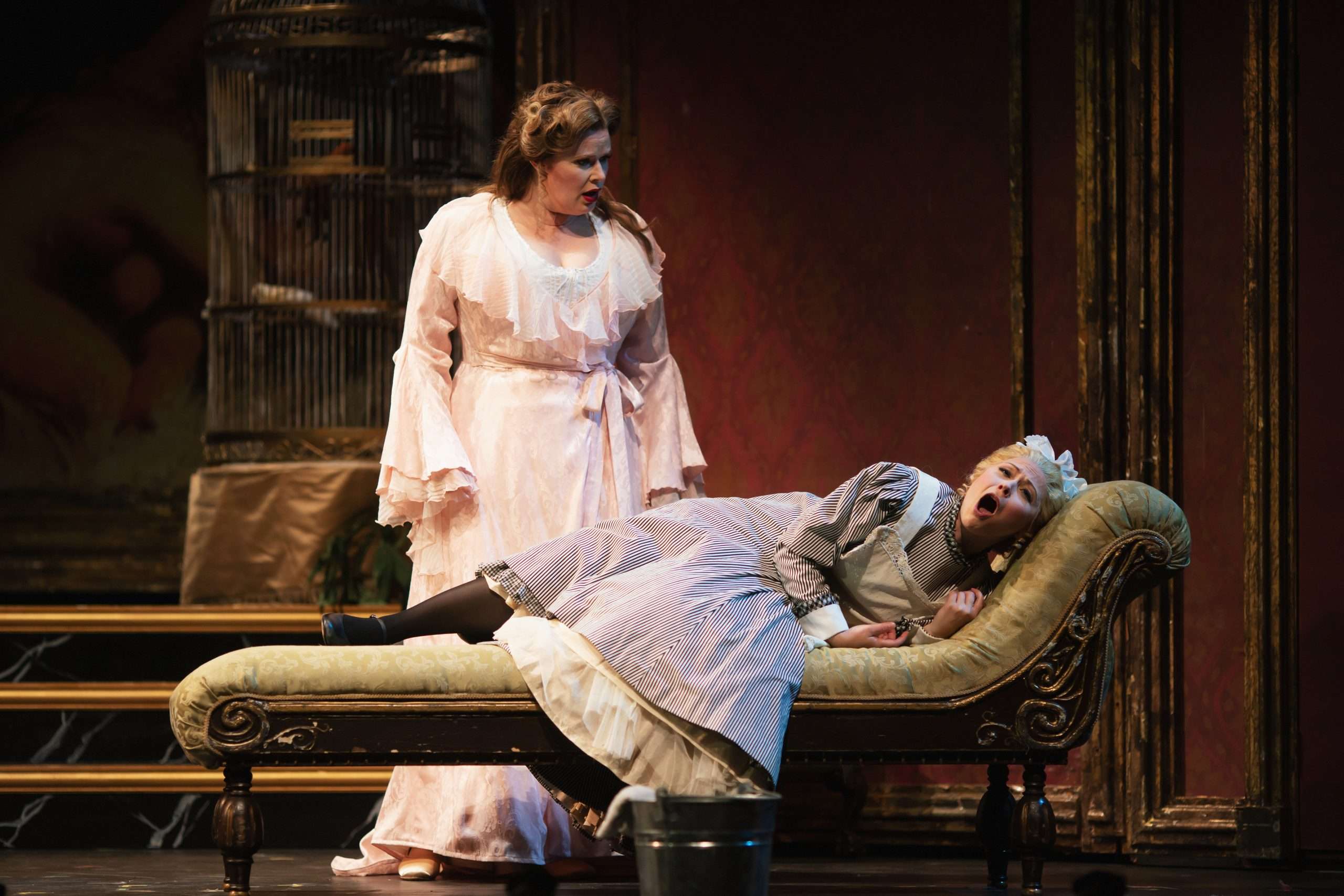 In the tradition of 19th-century comedic opera, the female arias are filled with coloratura acrobatics on a grand scale, and Clark’s soaring and expressive soprano and Alisa Jordheim’s (as Rosalinde’s chambermaid, Adele) crystalline trills and agile leaps reverberate throughout the opera house’s excellent acoustics. Clark stops the show in Act II with her magnificent czardas, in which she pretends to be an Hungarian countess, and Jordheim’s rendition of “The Laughing Song,” is astonishing.

Ferguson, as Eisenstein, is uniquely boorish and boyish as the unrepentant (at least until the climax) philanderer, his tenor deftly handling the higher registers. Alfred (Matthew Plenk), an opera singer who had an affair with Rosalinde long before her marriage to Eisenstein, is still hounding her with arias outside her window, through which he occasionally climbs (and falls). Plenk’s warm tenor and hilarious hyperbolic characterization add immeasurably to the mayhem. 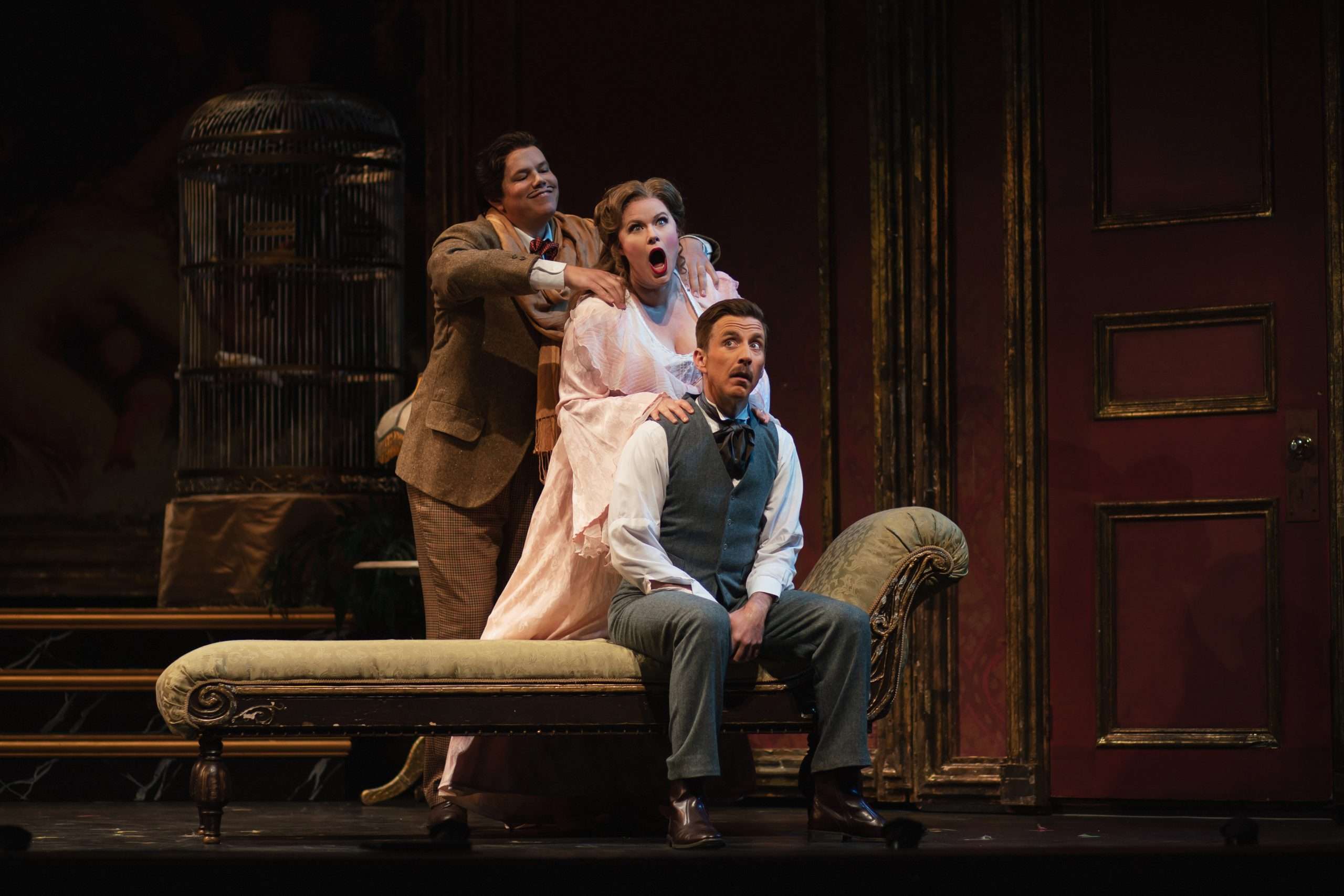 He who laughs last, laughs best, and Cook embodies this to the brim as Falke, extolling his ball to Eisenstein with his robust baritone (sparkling in “Brüderlein”) and in the sheer delight he shows when explaining the ruse to the entire company.

The extended shtick with Frank (Andrew Simpson), the prison governor—coming to arrest Eisenstein, instead getting Alfred, who breaks out of jail while Frank attends the ball disguised as “Chevalier Chagrin,” parrying with Eisenstein, disguised as “Marquis Renard,” using hackneyed French phrases to fool each other, as neither is fluent—is an ironic and well-turned jest (if you can follow that)! Simpson’s bass-baritone sparkles in “Brüderlein.”

In a tip of the hat to contemporary sensibilities and debate over gender identity, the trousers role of Prince Orlofsky (Kira Dills-DeSurra) becomes a clever statement in the finale, when the Orlovsky trumps Frank for Adele’s hand, given the director’s (Joachim Schamberger) choice at making her disguise part of Falke’s ruse, when she is given Orlofsky’s costume by Falke during the overture. We toast Dills-DeSurra’s stellar mezzo in “Chacun a son gout.” 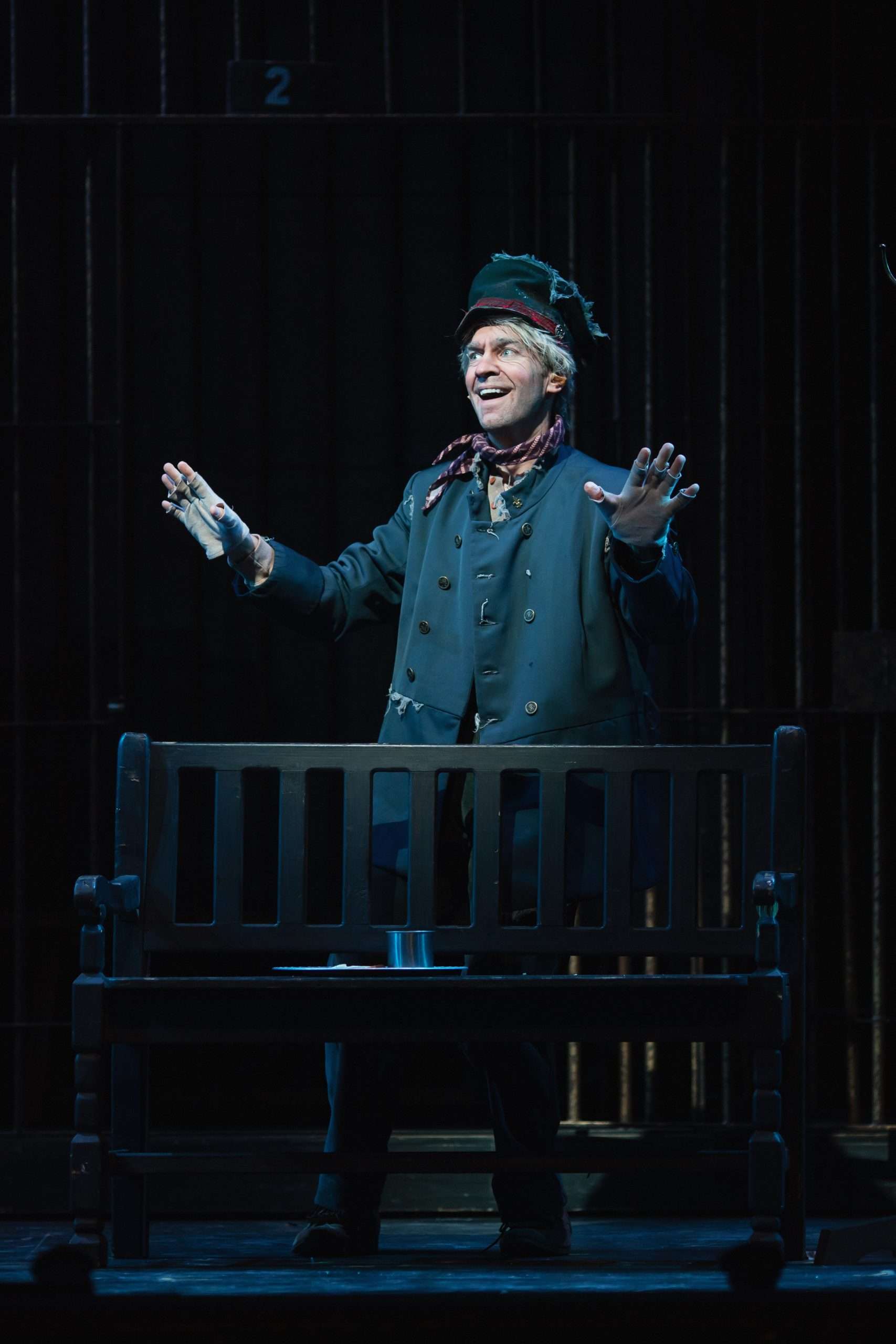 Curt Olds, in the comedic role of Frosch, the jailer, is a gas, with his guffaw-filled slapstick send-up. Excellent character work as well by Francesca Mehrotra (Ida) and Nathaniel Catasca (Dr. Blind).

Central City Opera’s presentation of Die Fledermaus, by Johann Strauss, Jr., runs through July 31st, in repertory with The Light in the Piazza and Two Remain. For tickets: centralcityopera.org … die-fledermaus/. 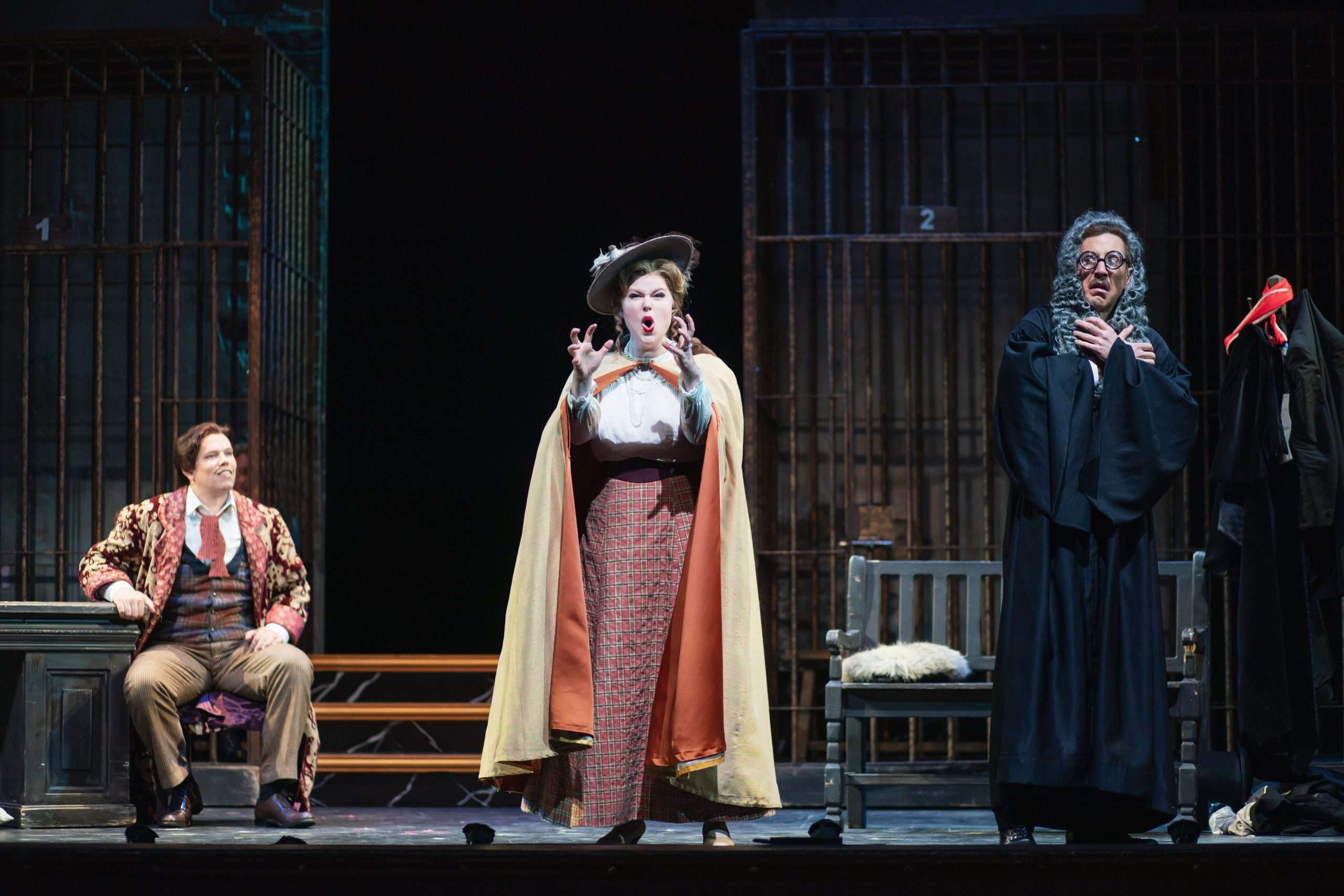