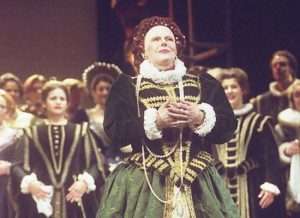 Since Pelham (Pat) Pearce joined Central City Opera as General/Artistic Director more than 22 years ago, the company has produced operas of varying size and scope, everything from classics to new and specially commissioned works. However, beginning with the U.S. premiere of Gloriana in 2001, the works of contemporary composer Benjamin Britten have been an artistic compass in the company’s repertoire. It’s Central City Opera’s goal to produce every work in the composer’s canon for one important reason…

IT’S GREAT THEATER, THE KIND THAT REACHES OUT AND GRABS YOU!

Summer 2019 is a landmark along the Benjamin Britten canon journey, bringing the Colorado Premiere of Billy Budd to the Opera House stage. Billy Budd will be the biggest show ever done inside the 550-seat theater. With a massive cast of strapping sailor characters with voices to match.

“I SWEAR THE ROOF IS GOING TO COME OFF!”

Despite the vast scale of this opera at sea, at its core, Billy Budd is an intimate story of moral struggle between the central characters. Seeing it on the Central City Opera House stage, you may as well have been shanghaied into the crew alongside Billy Budd himself. You won’t only experience the voices of the critically acclaimed singers. Here, it’s much more. The story will wash over you in every micromovement and expression of the performers — You can see them sweat.