Setting the Stage for BILLY BUDD 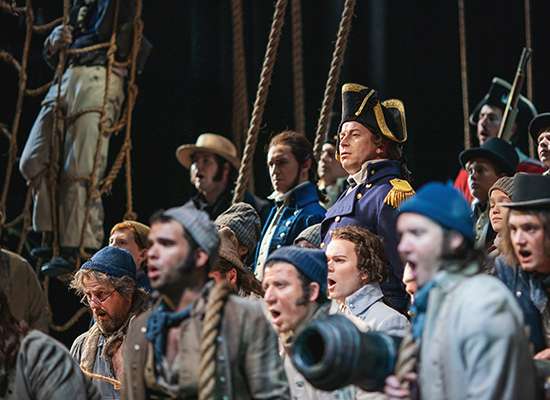 BASED ON HERMAN MELVILLE’S NOVELLA, Billy Budd is a play in contrasts. Britten’s opera explores the duality of morals and law while pitting the expanse of the sea against the claustrophobia of the small society onboard a 1797 British warship.

With the Napoleonic Wars raging at port and starboard, the H.M.S. Indomitable and its dutiful leader, “a sailor of distinction,” Captain Vere, serve as a symbolic beacon of stability and strength. However, when the young and idealistic Billy Budd is forcibly enlisted, balance within the small maritime society pitches sharply. Billy’s magnetic personality and “beauty” draws nearly the entire crew to love him, with one imposing exception — Master at Arms John Claggart.

“…AT ITS CORE, BILLY BUDD IS A TAUT CHRONICLE OF MORAL STRUGGLE.”

It is up to interpretation whether Claggart’s hatred for Billy is a personified struggle between evil and good, the tumult of a romantic attraction to Billy that Claggart cannot abide or simply a regimented set-up to Captain Vere’s moral dilemma. Whatever the cause, the Master at Arms makes a point of cruelly targeting Billy Budd. Meanwhile, on the heels of mutinous outbreaks elsewhere in the British Royal Navy, whispers of rebellion trickle amid dark corners of the ship, and Billy’s charisma and agreeable disposition mark him an intriguing asset to the cause.

“BRITTEN’S OPERA FORCES AUDIENCES TO CALIBRATE OUR OWN MORAL COMPASSES.”

When tensions crest and Billy is brought to trial over crimes committed in self-defense, the fair and intellectual Captain Vere faces a decision that haunts him to his epilogue.

Despite the vast scale of this opera at sea, at its core, Billy Budd is a taut chronicle of moral struggle. The dramatic potency of Britten’s opera weaves riveting theater with visceral music, forcing audiences to calibrate our own moral compasses.