A Tribute to John Moriarty 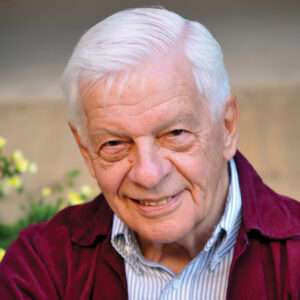 With heavy hearts, we share the news that John Moriarty, Central City Opera Artistic Director Emeritus, passed away on January 5, 2022 at the age of 91. Central City Opera will be forever grateful for the tremendous impact he made on our organization and the opera industry. We celebrate the incredible legacy he leaves behind.

Moriarty was a notable conductor, stage director, vocal coach, collaborative pianist, author, educator and administrator. His career with Central City Opera began in 1978 when he was brought to conduct and to create what is now known as the Bonfils-Stanton Foundation Artists Training Program, an intensive program for up-and-coming opera performers. He then took over as Central City Opera’s artistic director in 1982.

“While much of his professional career was spent at Central City Opera, his impact on the opera industry is far-reaching,” said General/Artistic Director Pelham “Pat” Pearce. “He was an exceptional teacher and helped develop the careers of some of the most renowned opera performers.”

Moriarty’s first professional opera position was with Santa Fe Opera, where he also founded an artist training program. He also worked as the director of training and as a conductor at Wolf Trap Opera in addition to several other notable opera companies. He led the opera departments at Boston Conservatory of Music and New England Conservatory. Among his publications is the widely assigned education instruction manual Diction. Training future opera stars was always at the core of his work.

His official obituary can be found here.

Learn more about John’s career on his Wikipedia page. »

If you would like to share a story, memory or photo of John, please complete this form below. We may reach out to you for permission to use your submission for any future tributes to John, for example in our 2022 Festival program. Thank you.