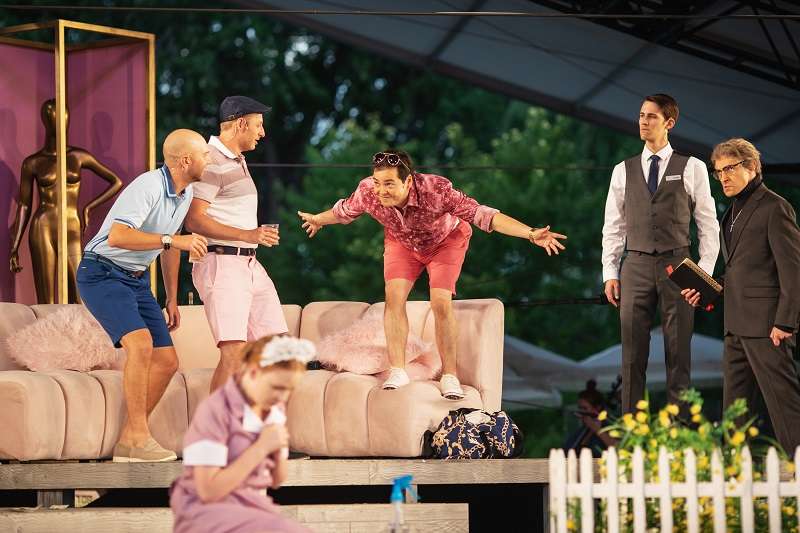 The weather was perfect on Saturday evening, July 10, as Central City Opera premiered the second of its mainstage productions in the open-air setting of Hudson Gardens in Littleton.  It was not too hot, there was no rain event, and the sun dipped behind the stage structure just before the opening downbeat.  And from that downbeat, it was virtually impossible for the audience to be distracted by anything, even some incidental traffic and train noise from nearby Highway 85.

Without any caveats about the outdoor setting, the minimal abridgement, or anything else, this production of Giuseppe Verdi’s Rigoletto is triumphantly tragic, emotionally riveting, and artistically sublime.  This is one of the grimmest operas in the standard repertoire, and director Jose Maria Condemi makes no concessions to lessen that aspect, even with his imaginative staging.

That staging is especially notable given the restrictions imposed by the outdoor stage.  Condemi manages to simultaneously fit three worlds into a tight space without any actual scene changes or tricks of lighting.  The spectacular cast, through their performances alone, makes it abundantly clear which world is inhabited at any single moment in the drama.

Condemi imagines the Duke of Mantua’s licentious court as a modern upscale country club, which works remarkably well, taking up the back portion of the stage.  The setting inhabited by Gilda, the title character’s doomed daughter, is a forward-placed domestic idyll, complete with a garden swing.  And on the other side of the stage front is the underworld inhabited by the assassin Sparafucile (who uses an old tire as a convenient sheath for his knife) and his sister Maddalena.

Only Rigoletto himself–the jester whose cruelty on behalf of the despicable duke results in the drama-defining curse–truly navigates all three worlds.  The duke’s invasion into Gilda’s world comes across as exactly that.

As with the other mainstage production of Carousel, the orchestra is placed behind the stage, barely in view of the audience.  For post-COVID times, it is a substantial ensemble, and CCO music director John Baril delivers a spectacular sound in conditions that are far from ideal.  The projected titles are placed in three locations so that the whole audience can easily see them without interference from the sun.  The opera is of course sung in the original Italian.

Verdi’s 1851 score, based on Victor Hugo’s 1832 play Le Roi s’amuse, is the composer’s earliest undisputed masterpiece.  Baril and Condemi show great respect for that score.  About 20-25 minutes is cut to facilitate a performance without intermission, but the great arias are all there and none of the drama is sacrificed.  It is not a long opera to begin with, and the tight, straightforward progression of the drama is one of its finest aspects.

It is a testament to CCO’s commitment to artist development that three of the five main roles are taken by performers who were once part of the company’s prestigious Bonfils-Stanton Foundation Artist Training program.  One of the others is a current apprentice artist.  The fifth is baritone Aleksey Bogdonov, who makes his company debut as the tortured jester.

Bogdonov’s performance is raw and emotional, but deeply nuanced.  He is believably coarse and rude at the beginning, while the duke’s courtiers are plotting against him and Count Monterone–whose daughter was previously seduced by the duke–proclaims his curse.  He then becomes tender and warm in the first scene with Gilda before turning desperate after her abduction and vengeful after her seduction.  Verdi did not give Rigoletto the opera’s most memorable musical moments (those are mostly reserved for the Duke and Gilda), but it is a demanding role, both vocally and dramatically.  Bogdanov’s plea for his daughter in Act II is truly heart-rending.

Soprano Alisa Jordheim is revelatory as Gilda.  An apprentice artist back in 2012, when she played a child character in Britten’s The Turn of the Screw, she is now a fully developed performer.  Her glorious Act I aria “Caro nome” was as vocally pure as could be expected, the high notes piercing through the open air.  The character’s sacrifice at the end can be a difficult sell, but Jordheim accomplishes it with aplomb.

Tenor Galeano Salas, an apprentice artist in 2012 and 2013, is wickedly delightful as the licentious Duke of Mantua.  Verdi was musically generous to this morally bankrupt character, who suffers no consequence for his villainy.  Salas grabs the audience’s attention from the outset in the opening scene, transforms effectively into a romantic suitor in his duet with Jordheim, and brings it home in Act III with the opera’s most famous number, the ubiquitous “La donna è mobile.”  That aria’s dramatically ironic reprise at the end is especially powerful.

Bass John Paul Huckle (a CCO studio artist in 2006) is a forceful presence as the assassin Sparafucile.  Huckle is doing double duty at the festival, playing Jigger Craigin–yet another seedy underworld-type character–in Carousel.  Mezzo-soprano Michelle Monroe, a current apprentice artist, plays the assassin’s sister and co-conspirator Maddalena.  The character does not sing until Act III, but Monroe makes the most of it, contributing strongly to the familiar seduction quartet and convincingly delivering a crucial plot point–her successful petition to her brother to avoid murdering the duke.

An important aspect of Rigoletto that has contributed to its enduring popularity is the presence of substantial roles for each of the five main vocal ranges, and CCO’s casting of those five roles is extremely strong.

The cast is limited to twelve total due to COVID considerations.  Of the supporting cast, studio artist Phillip Lopez deserves mention as Count Monterone, along with Ryan Lustgarten, Erik Nordstrom, and Andrew Simpson as the nobles who abduct Gilda.  Lopez pronounces the curse in a solemn bass-baritone, and the trio of nobles more than hold their own as a foil for Bogdanov.